Charlottetown, PEI- The Alberta Pandas will be heading to the 2020 U Sports National Championship in Charlottetown, PEI as tournament favourites on Sunday. All eyes will be on the star-studded Alberta Pandas at this year’s tournament as they are in prime position to add a record ninth U Sports Women’s Hockey Championship to their trophy cabinet and are looking for vengeance after a disappointing fourth place finish at last year’s tournament.

How They Got Here

The Alberta Pandas women’s hockey team came into this year’s action on a tear and have never looked back. They finished the regular season atop of the Canada West standings for a second straight year with an impressive 19 – 8 – 1 – 0 record giving them a first round bye. Their impressive play did not stop in the playoffs as they first came up against the UBC Thunderbirds who they dispatched in two hard-fought contests winning 1 – 0 (3 OT) and 1 – 0 (OT). The Canada West Finals saw the Pandas display their dominance as they convincingly swept the Mount Royal Cougars by score lines of 5 – 1 and 2 – 0 respectively. For the 14th time in program history representing the most ever, the Pandas were the champs of the Canada West league and are off to Nationals. 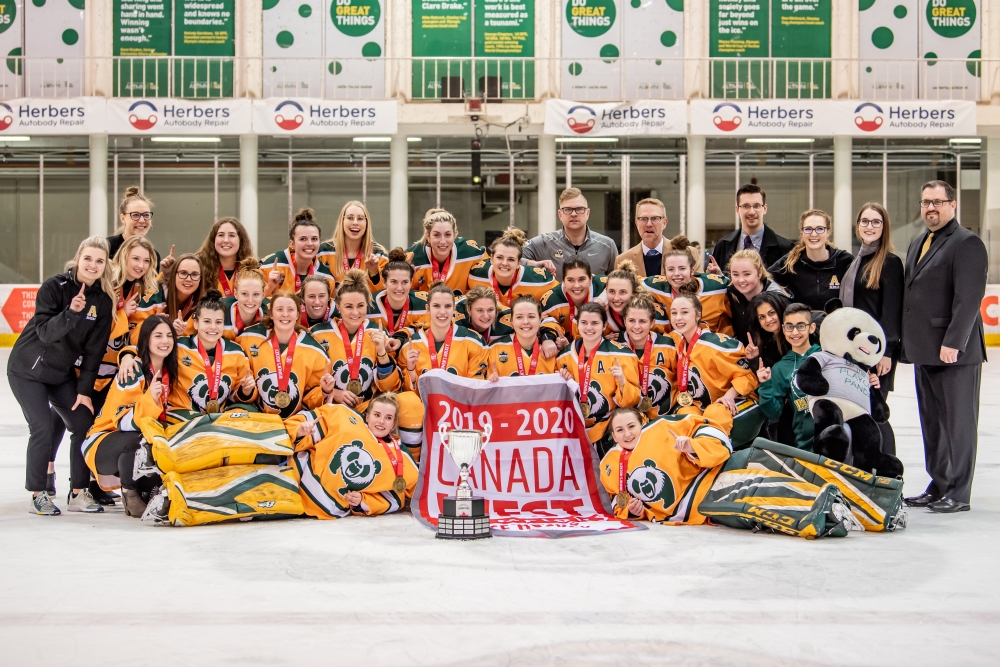 Looking at the statistics of this hockey team, it is not hard to see why they are deemed tournament favourites as they impose their dominance all over the stat sheet.

Alberta led the Canada West in goals scored, totaling 81 over the course of the regular season. However, what is more impressive is the fact that they held opponents to only 31 goals and with their 1.11 GAA not only lead the Canada West but also the nation as the best defensive team. Not only are the Pandas a threat 5 on 5 but they are also extremely dangerous on special teams ranking second in the nation with a 25.2 PP% and were the top team in the Canada West when short a player with a 90.7% PK success rate. The Pandas success does not just fall on the players alone but also transpires into a dynamic goaltending duo which finished second in the Canada West with a solid .936 SV %. On paper the Alberta Pandas are a team that can win a game in a variety of ways whether it be special teams, defense, offense or goaltending the Pandas have all the things that are needed for a team to win at Nationals. 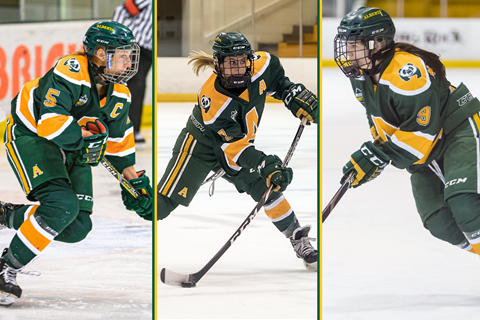 The Pandas are a talented team across the board with five players receiving Canada West all-star honours, but there are two players that will need to be at the top of their game if they want to reign supreme at this year’s tournament. 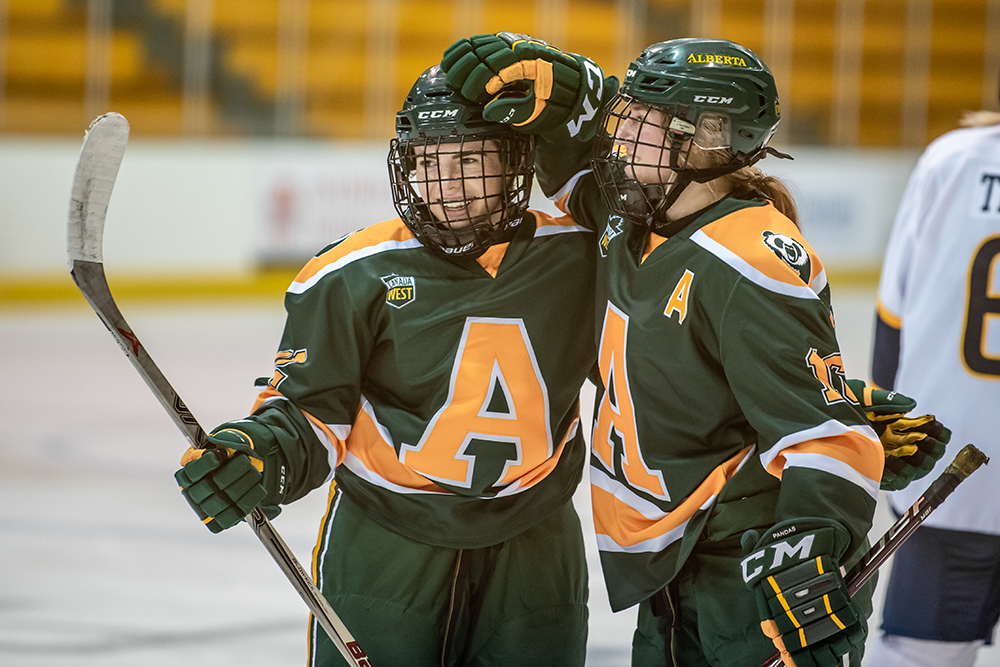 Alberta fans can be sure that star players Autumn MacDougall (2nd in goals and points in the nation) and Alex Poznikoff (2019 U Sports Player of the Year) will contribute to the team’s offense but if the Pandas are to have success they will need their secondary stars to help out. In comes first year Madison Willan who has made a name for herself in the Canada West league as she was named Canada West Rookie of the Year and an All-Rookie team member leading all rookies with 25 points. At the time of writing this she has just been named the 2020 U Sports Rookie of the Year becoming the first Panda to win this award since 2000 when Danielle Bourgeois took it home. There is no doubt that the Pandas have scoring talent but when other teams put out their best checking line to eliminate the proven stars of this team it will be up to players like Madison to step up and take advantage of weaker matchups. She has shown all year that she has the quality and skill to handle this type of responsibility as a first year but the key question is can she handle the pressure of playing in the National Championship as a first year. 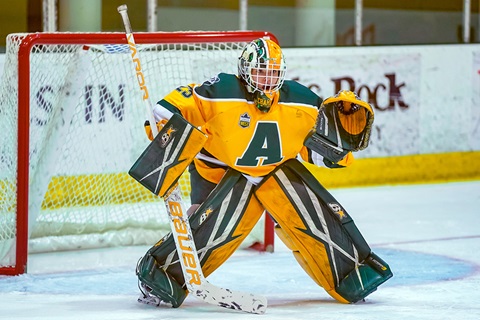 If a team’s star player has an off game there is still a chance that they can win but if your star goalie has an off night it is going to be a very long game. Fourth year goaltender Kristen Chamberlin has been the definition of consistency this year as she has been stellar every single night. Her season stats have her ranked as one of the best goalies in the nation if not the best as she posted 0.79 GAA (1st), .955 SV% (2nd), and only conceded 11 goals against (2nd) in 14 games played. Having been with the Alberta Pandas when they won the U Cup in 2017 she understands the pressure and has the experience of playing in high intensity hockey and will look to be the calming present for the Pandas when they face adversity this weekend. For a team like the Pandas who are used to winning, it will be important that when things go awry that they are able to build off the calmness that Chamberlin displays in the crease and play without worrying about their goalie.

The Alberta Pandas first matchup will feature the UPEI Panthers, this year’s host of the tournament who had a program best season finishing with a 20 – 7 – 1 record good enough for third in the AUS. It is crucial that the Pandas do not view the UPEI Panthers as a stepping stone to their ultimate goal as although the Panthers team are not a team with the star power of the Pandas, they are a team that plays as a committee and know how to win when it matters. The Pandas will need to get traffic in front of Camille Scherger, the Panthers star goalie who posted a .945 save percentage (6th) and a 1.43 GAA (9th) and who is completely capable of stealing a game. The Pandas can also expect to go on the powerplay as the Panthers spent the most time in the sin bin compared to other teams in the AUS playoffs and they will have to capitalize on these opportunities. However, the Pandas must be wary when up a man as the Panthers had the second best penalty kill in the regular season and were perfect in the playoffs, but it is their speed that makes them dangerous as they scored three shorthanded goals in the regular season and one in the playoffs.

The Alberta Pandas are no doubtly one of the most skilled teams at this year’s National Championship and definitely have the tools and potential to win the whole event. However, at the U Cup there is no such thing as a pushover team and the Pandas will have to make sure that they bring the same mindset that they have all season if they want to walk away victorious with their record ninth U Cup.

To watch this year’s tournament tune into the CBC Sports Website or the CBC Gem App. The Alberta Pandas kick off their tournament against the UPEI Panthers on Friday March, 13 at 6 p.m. (ET) or 3 p.m. (PT).